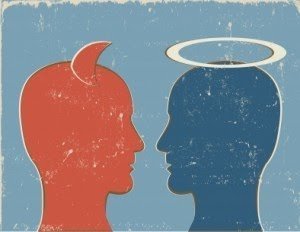 Is binary thinking a good thing: Yes or No? 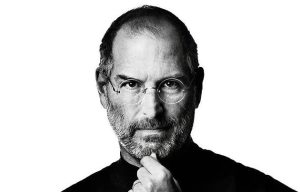 The recent Walter Isaacson biography mentioned Steve Jobs’ tendency towards binary thinking – how he would put people in one of two camps, ‘very good’ or ‘very bad’.

Is this another powerful management technique from the polo necked guru?

Shortly after starting my working life for a certain government department I was summoned to deliver a paper to a person in the senior management team meeting.

With quivering fingers I pushed the elevator button. To a nervous new recruit I wasn’t just going to the top floor, I was scaling the cliffs to the top of Mt Olympus. These men (and they were all men) were toga clad demi-gods who reclined on clouds discussing philosophy and passing judgments on the lives of mortals.

I entered the room and hung about the walls for a few moments waiting for a chance to deliver my document. I caught the gist of the conversation. They were discussing which underling should be in charge of a certain new project. The fleshy head of the department, who I will call Dear Leader, asked for suggestions. Someone suggested a name. Dear Leader shook his jowls and wrinkled his nose.

In the silence that followed, I dropped the paper in front of the person and backed away. I was puzzled and disturbed. I had worked with the named individual and thought he was impressive. To be exact, he was very good at some things and ordinary at others. Certainly ‘shit’ seemed a strange way to refer to him. Where did this attitude come from?

I had an image of Dear Leader in the bathroom that morning, splashing Brut on his jowls, pouting into the mirror and resolving once again to be vigorous, thrusting and decisive. A breath of minty fresh air in the dank thinking of his direct reports. A gulp of Metamucil through the brown gunk of their constipated logic. Yes he might be perceived as blunt. But pandering to the sensitivities of the handwringers, knuckle biters and lollygaggers just leads to teeth gnashing, procrastination and rampant onanism. You can’t make an omelette without cracking a few egos. And besides (as he winked and fired a finger gun at his reflection) Steve Jobs does just the same.

‘People were either “enlightened” or “an asshole.” Their work was either “the best” or “totally shitty.” Bill Atkinson, the Mac designer who fell on the good side of these dichotomies, described what it was like.

“It was difficult working under Steve, because there was a great polarity between gods and shitheads. If you were a god, you were up on a pedestal and could do no wrong. Those of us who were considered to be gods, as I was, knew that we were actually mortal and made bad engineering decisions and farted like any person, so we were always afraid that we would get knocked off our pedestal. The ones who were shitheads, who were brilliant engineers working very hard, felt there was no way they could get appreciated and rise above their status” – ‘Steve Jobs: The Exclusive Biography’

This kind of action might sound creepy to you and I, even offensive. But maybe that’s because we are frustratingly mortal while Steve Jobs built more than one billion dollar company. So should we ignore the bleatings of the sheeple and be more black and white in our judgments? Was Dear Leader right to adopt this binary thinking?

No of course not. He was being a complete jerk. A bona fide knuckle dragging, mouth breathing bully. To be so dismissive of one his employees, in such an aggressive way (daring his gulping direct reports to contradict him, while leaning back in his chair and polishing his cod piece) is horribly objectionable. He couldn’t be more offensive if he was using a whale oil powered BBQ to fry up baby seal sausages garnished with freshly grated rhino horn.

Firstly, it’s failing, or refusing to make the distinction between the skills required to do the task and the person themselves. What exactly was his concern with the person- his analysis? His writing? His research skills? Could these have been addressed in some way? If he had a specific objection why didn’t he just say it?

Secondly, the mis-use of profanity. French has two forms of the word ‘you’, which you use depending on your relationship with the person you are talking to. In Japanese you must subtly adapt the conjugations according to strict rules that depend on fine grades of social status. Until, when talking to the Emperor, it is almost a different language.

English is more egalitarian, but not completely. There are times and place for certain vocabulary. If you are using profanity in a formal setting then you have an agenda. Dear Leader is deliberately raising the stakes on his direct reports making it much harder for them to respond. Make a case and I can argue your premises and logic. Say only how you feel and, if I disagree, we have a stalemate. If we have a stalemate and you sign my paychecks then you win. When the boss drops the s-bomb into a formal setting, to evoke extreme disgust about a person or an issue, then who is going to respond?

Sure we all get agricultural on occasion, for example, when I’m critiquing the players that you choose for your best All Black team of all time. But then you are free to trash talk my team selection. That’s because we are peers, talking nonsense. To each other. Amongst friends then using informal language is much less important. In fact sharing strong likes and dislikes is one of the ways in which people bond. Shared grievances are one of nature’s social lubricants. The weather. The government. The price of mochachinos, fantasy sport teams. The rule is that it is small things. Not politics or religion or employees.

‘Yes,’ you might say, ‘but aren’t some people unredeemable? In which case ‘shit’ might be the right word.’

Possibly, but it has to be pretty extreme case. For example if the conversation had gone like this.

‘We need one more person to make the numbers on the company basketball team.’ “What about Mike?” “Mike?” “You know. Mike the Midget. The guy with the drinking problem who forgets the rules. The guy who mooned the ref when he was sent off after biting one of the players’ knees. He’s awesome!” “No, he’s shit.’

Yes possibly then. But not in this case. Dear Leader was deliberately mis-using the language of mates to stomp his views on his reports, kill the debate and ram-rod his opinion down your gullet.

“But,” you say, “You have to admit that life is binary, we have to make yes or no decisions. That means sometimes the discussion has to end.”

Yes, decisions are binary, people aren’t. But don’t listen to me. Hear it straight from the ghost of Steve Jobs. (Ghost of Steve, over to you.)

“I see that I’m going to have to bring this closer to home. You’re shit. Stop pestering me with your arguments. You see in this relationship there is a level of authority above logic, and that’s how I feel. By arguing you are under the delusion that your opinion matters. Let me tell you something. Arguments are for losers. Facts can’t be trusted. What can be trusted is my opinion, and the opinions of a few nervous close advisers I have hand-picked.”

Thanks Ghost of Steve, that’s enough.