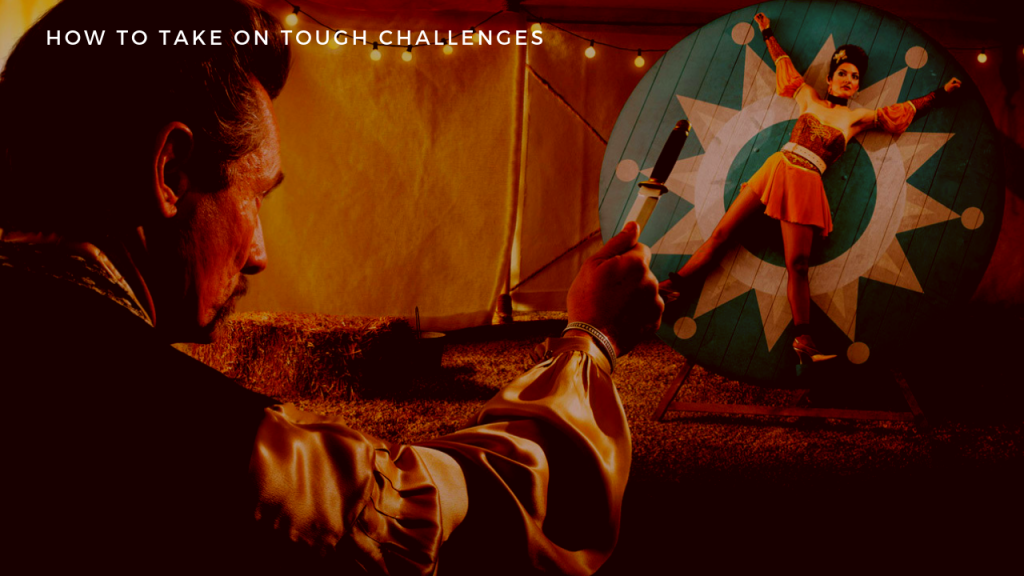 If an alien pointed a gun at my head and gave me 10 seconds to talk about goal setting – Sure I would tell them about the SMART acronym. (That a goal should be ‘Specific’, ‘Measurable’, ‘Attainable’, ‘Realistic’ and ‘Timebound’)

Now the SMART acronym doesn’t help you achieve a goal, it just describes what a goal should look like. You put your challenge into the SMART ‘formula’ and out pops a nice clear target.

But hang on. That’s wrong already. When we take on a challenge, when we try to improve our situation, it’s not because we like to set targets, it’s because we want to get some benefit.

So when do we get the benefit? Is only when you achieve your target, or do you start to get it, bit by bit along the way as you put the effort in?

I think because we see it so often in sport and competitions that we believe that there is always a sharp division between success (and getting a lot of benefit) and failure (and either getting no benefit or a lot of pain).

And so we almost always think that if we don’t reach our goal then, we’ve not only failed, but worse – the whole challenge has been a waste of time.

But is that really the case?

Recently I was down in Wanaka and I found myself at the start of the track that leads up to Roy’s Peak You could look up and see the track taking switch back after switch back, until there, above the snow line, above the yaks, above the Sherpas, blowing up in the Jetstream, was the jagged summit of the mountain. It was getting late in the day – but set myself the goal of getting to the top.

I didn’t make it. It was getting dark when I got to the final ridge and so I turned back a few hundred metres from the summit.

Let me ask you a question – did I fail?

Really? Isn’t the opposite point of view also true? And doesn’t that give you a hint that there is something unhelpful about the way we think about goals and achievement?

Here’s my go at untangling it.

Yes I did fail. Success was reaching the top and I didn’t reach the top.

But let me ask you a much better question. If I had known that I wasn’t going to reach the top should I still have taken on the challenge?

To figure out the answer you’ve got to know what the benefits are, because achieving ‘success’, that is reaching the target, is not the same thing as getting benefits.

In this case I was going for a run to burn off some energy, see some fantastic views and get fitter. Regardless of my slightly arbitrary goal of getting to the top- every step I took up the track I was getting the benefits.

You can characterise ANY challenge based on the relationship between effort in and benefit out. Most goals fall into only two camps, RAMPs and STEPs.

For some challenges the more effort in the more benefit out. These are goals like getting fit, losing weight, saving money, learning a language, or jogging up a peak to get a view. These are RAMPS.

In some cases, though, there is a sharp line between success and failure. Like if you’re in the business of doing backflips on a motorbike, if you’re a cliff diver, or starting a land war in Asia, or if you find yourself playing that weird Mayan ball game where the losers get sacrificed to the gods.

For these types of challenges, things are pretty normal until a moment of performance when you either get all the benefit or you don’t. Let’s call these type of challenges STEPS.

Here’s the clever bit. Most goals that we take on in real life are not do or die, winner take all STEP goals. Most of the actual goals we take on in life the more we achieve the better off we are, if we miss our target by 1% we still achieve 99% of the benefit. BUT WE TREAT THEM LIKE STEP goals.

Our challenges are often like game show cash grab machines. The more we do the better off we are. But we treat them as if they are do or die motorcycle stunts.

Which means if you ever feel that you are NOT going to be successful then your motivation plummets. This means it’s more likely that:

– you won’t take on a goal that you might get at least some benefit from,

– you quit early on challenges you should persist at, and

– if you don’t reach your target you give yourselves a psychological kicking.

In summary I’m saying you will make better decisions and have a healthier mindset if you are clear about when you get the benefits.

In the next post I look at putting this distinction to work. It turns out that it’s surprisingly helpful. I’ll be suggesting ways to keep motivation up even when it looks as if you’re going to fall short. And how you can safely approach doing a backflip on a motorbike, or any other challenge that might leave you broke or broken.