I was a strategy consultant with The Boston Consulting Group when I decided to take part in the world’s toughest endurance event – the Trans-Atlantic Rowing Race.

This requires rowing a 7m plywood dinghy, 5000 km between the Canary Islands and Barbados. An unusual choice for anyone but particularly someone who had never rowed before and was prone to sea sickness. I like to think I used my business skills to great effect, analysing and innovating on the most critical elements of the preparations. However, plans went awry just six weeks before the start when my rowing partner pulled out and 22 year old Jamie Fitzgerald signed on as a last minute replacement.

We encountered storms, curious whales, sleep deprivation, breakages, hallucinations, stinging jellyfish and were dramatically thrown out of our boat in a night time capsize just 130 miles from Barbados, leading to a desperate and thrilling sprint to the finish. In the end, our rookie crew not only won the race we also set a new world record.

Throughout the preparations and the journey I learned valuable lessons about goal setting, determination, teamwork under pressure, persevering through adversity and maximising performance.

The incredible story of my transformation from couch potato to world record holder is told in ‘The Oarsome Adventures of a Fat Boy Rower’ published by Random House and awarded the Sunday Star Times ‘Sports Book of the Year 2008′. 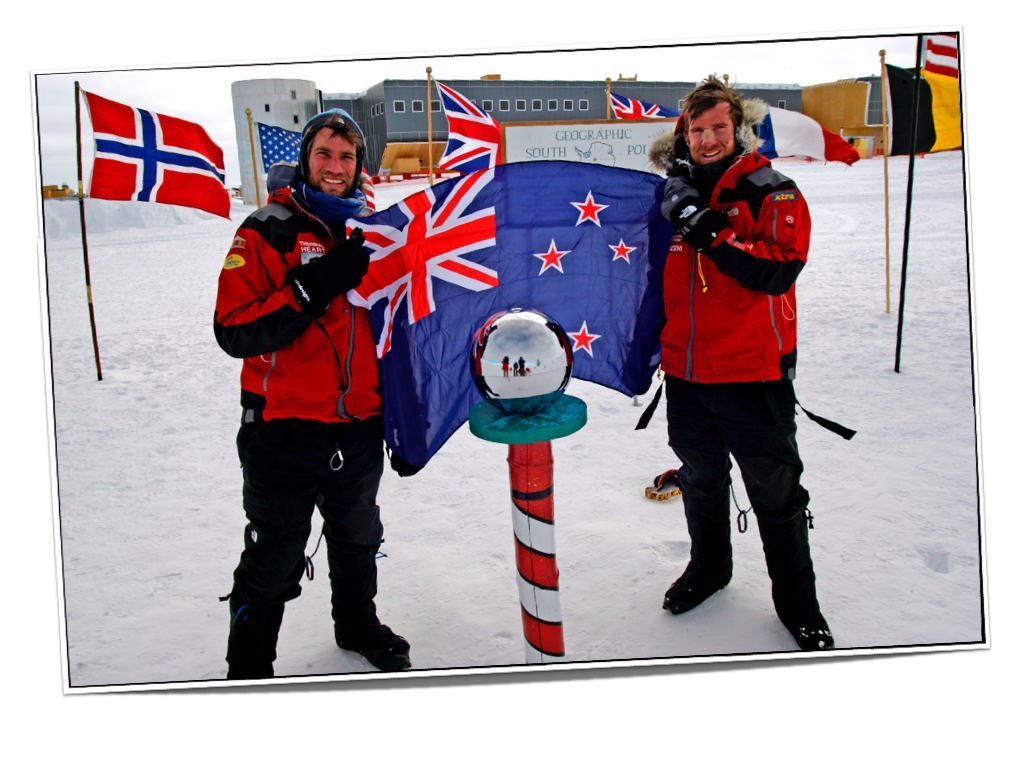 I then took on an even more ridiculous challenge – the first ever unsupported trek from the coast of Antarctica to the South Pole and back. Starting with very limited experience (Jamie had never seen snow falling) we spent months researching, consulting with their patron Sir Edmund Hillary, training in the Arctic and rehearsing the skills they would need to survive in the highest, driest, windiest and coldest place on Earth.

The skills learned in the Atlantic were tested again and this time taken to another level. Pulling loads that started at 160kg and temperatures as cold as -40C, we battled frostbite, injury, whiteouts, crevasses, gear failure and slow starvation. In the 52 days it took to get to the Pole I lost 50 pounds. Find out more about this adventure here.

Then I landed the best job in the country – being the co host (together with partner in crime Jamie Fitzgerald) of the TVNZ documentary series ‘First Crossings’ and then ‘Intrepid NZ’. In these shows we recreated some of the hardest parts of pioneering adventure stories in New Zealand. (If you haven’t seen it before it’s like ‘Man vs Wild’ with waistcoats.)

My professional career has included working in problem solving, consulting and strategy roles at The NZ Treasury and large multinationals like The Boston Consulting Group, as well as small businesses and more recently as the CEO of a software startup. This varied background combined with the universal appeal of his adventure stories means that I’m able to relate to a wide variety of audiences, ages and at all levels from the Board, to CEOs to frontline staff. Whether it’s to a small group of senior management at an executive retreat, a team off-site, or a keynote to 1800 sales staff, my advice about how to unleash your potential – shared in highly visual and entertaining presentations or dynamic interactive workshops that have made a lasting impact on thousands of people.

“We were thrilled with Kevin’s keynote in our recent NZ Leadership Program – he took the group on a journey of key leadership lessons with humour, humility and exceptional stories of personal challenge and achievement. This is a session that will resonate with all levels of the organisation – from individual contributors and first time leaders to the C Suite. If you’re looking for an engaging way to excite your team to challenge the status quo, achieve goals that seem out of reach, to execute on a plan and/or to stay resilient when the going gets tough then I’d suggest you’ve give Kevin a call.”— Sam Sheppard Group HR Director, Arthur J. Gallagher Australia & New Zealand

And when I’m not doing that I’m still having adventures at home keeping up with two boys and my lovely wife, breast surgeon Magda Biggar. For how we met and married amidst the adventures read ‘Escape to the Pole’!